Bulk Pricing:
Buy in bulk and save

Phantom is the only non repellent labeled for indoor general pest control including commercial food handling areas. That means it offers a unique and extremely effective general pest solution for both homeowners and commercial customers in establishments where food is handled, served or stored.

Phantom is an ideal product to control roaches because of its non repellent properties it can be used in conjunction with roach bait such as Maxforce Bait gel. Other insecticides can keep the roaches from getting to the bait. This is not a problem with Phantom.

Phantom has a very low water solubility, which means it binds very tightly to soil and is less likely to be washed out of treated areas, and its active ingredient (chlorfenapyr) is applied at a low dose. Phantom has virtually no odor, which means you and your family won't notice a thing.

Chlorfenapyr, the state-of-the-art active ingredient in Phantom, works differently than other termiticides, which typically attack the insect's nerve cells. Instead, Phantom attacks cells in the insect's body and prevents these cells from generating sufficient energy to sustain life.

Phantom has the ability to kill pests that have not come in contact with the treated area. This mode of action is called "secondary kill", one insect exposes other insects to the insecticide. Exposure occurs by contact, grooming and food exchange.

This secondary kill action is a primary contributor to both Phantom's incredible performance and its ability to control entire pest populations at low doses.

Phantom is not only a Termiticide that kills termites by ingestion and contact, but also a powerful and effective insecticide for ants and cockroaches. Phantom combines non repellency, superior control, long-lasting effects in a low-dose, virtually odorless formulation. Phantom can be used as a soil drench, wall foam or as a general use spray as desired.

21 oz bottle makes 28 gallons of 1.25% solution for termites or 7 gallons of general use spray for cockroaches and ants. 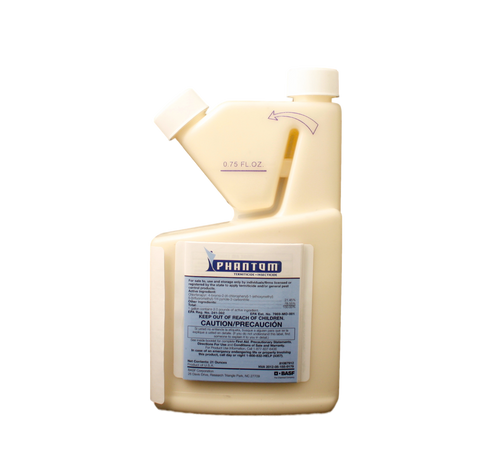