Bulk Pricing:
Buy in bulk and save

Optigard Ant Gel Bait offers unparalleled control of a broad spectrum of ants, including Argentine, carpenter, ghost and other nuisance ant species, by ingestion and transfer of the bait, providing efficacy against the entire colony, not just the workers. Optigard Ant Gel Bait doesn't have the unsightly yellowish-brown color or the inconsistent, runny consistency of other baits. It's transparent at application and stays clear throughout treatment. It has little to no odor and doesn't stain treated surfaces. And its thicker consistency allows it to hold its shape without running.

Because of the unique action of its active ingredient, thiamethoxam, Optigard Ant Gel Bait is readily transferred throughout the colony after its initial ingestion. Packaged in a ready-to-use, 30-gram syringe, Optigard Ant Gel Bait may be applied in spots up to one gram in cracks and crevices where ants nest and forage.

Once ingested by foraging workers, Optigard Ant Gel Bait doesn’t kill immediately. Instead, it is designed to take advantage of ant trophallaxis, or exchange of fluids. Ants that feed on the gel return to the nest and transfer the bait to their nest-mates, working to eliminate the entire colony, including queens. Tests show that a reduction in workers will be apparent in two to three days, with complete colony elimination occurring within a week or more.

Furthermore, ants will continue to feed on Optigard Ant Gel Bait even after the active ingredient becomes concentrated as the product dries out over time. The transfer effect is diminished because the ants die more quickly, but they’re never repelled from feeding.

Optigard Ant Gel Bait can be used indoors and outdoors for control of nuisance ants. It comes in a ready-to-use 30 gram syringe with plunger and requires no mixing, and should be applied in pea-sized amounts where needed.

For use indoors, apply bait in areas where ants are found foraging or nesting, such as: cracks, crevices, corners, behind kitchen appliances, baseboards, under sinks, around window and door frames, around sinks and water heaters and in attics, crawlspaces and garages. Bait must be placed out of reach of children and pests.

For control outdoors, apply Optigard Ant Gel Bait to areas where ants trail, forage and nest, as well as on structures where ants are observed and at any points of entry into the structure. Placements may also be made to areas which are potential sources of moisture, including soffits, eaves, weep holes and where pipes and wires enter the structure. 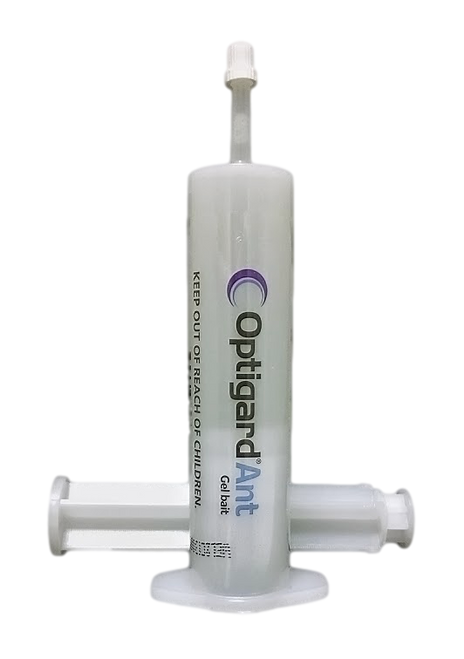